I assume that when someone asks this question they assume at least subsistence level of salary and just about acceptable job conditions. I also assume that “job conditions” are a complex set of attributes including physical environment, role, working hours, growth, recognition, the boss, colleagues, etc. Having assumed this, the question then becomes – would one be better satisfied in a job if the job conditions were improved substantially or if the salary was raised substantially?

Income tends to be an obvious and standard measurement of “satisfaction & happiness” by people across the globe. We can’t help but compare ourselves to our neighbours and friends, i.e. a house with a garden, two cars, or something else. Money can help with material stuff – a new car, a bigger house, an exotic vacation, etc. But is it enough? Will you compromise job conditions for money?

The below graph (Source: Glassdoor Economic Research) seems to suggest that salary contributes very little to job satisfaction (about 13%). You can read the original Glassdoor article here

The other thing to consider is the law of diminishing returns. At what salary levels does the curve between job satisfaction and money start flattening out? Or is it a linear relationship?

Before we reach a conclusion, I would like to add two other elements to this question to address it better. The first is Temporal, by this I mean – “Where in your career are you – just starting out or with a good many years under your belt?”. Although there could be exceptions I would think that more salary would give a higher satisfaction during the early years of one’s career. Your experience would eventually teach you that salary is not enough, and that’s when “job conditions” would kick in and provide higher levels of satisfaction.

The below graph (Source: Glassdoor Economic Research) seems to demonstrate this – 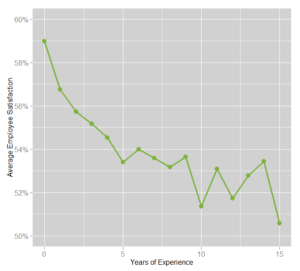 The second element is Social, and by this I mean a set of things like peer group and the broad social milieu in which one finds oneself. This element may completely distort the salary aspect. If you are influenced and surrounded by highly paid individuals & ostentatious displays of wealth  then probably you would go for the salary at the cost of job conditions. On the other hand if you surround yourself with a fair mixture from society then your satisfaction may not come from more money.

Of course ‘Maslow’s Hierarchy of Needs’ would determine the satisfaction levels for each individual irrespective of age and experience. It would be great if there was a definite answer to this question – “Better job conditions or higher salary – which contributes to higher job satisfaction?” – since then organisation leadership and human resource departments would not have to spend considerable time in figuring out how to keep their people engaged and satisfied.

Do leave your comments and thoughts below..

At PeopleFusion we believe in “Bringing Organisations and People Closer”.  Our clients,  people and strategic partnerships define who we are. They are shaped by a deep understanding of your needs and a collaborative working style. We help companies grow their business & develop their employees. We coach individuals to be successful in leadership roles and enable them to make appropriate career choices. This allows both company & individual to grow to their fullest potential.

It's official, I am now a member of International Coaching Federation @icfhq. https://www.credly.com/badges/eaa3aeff-bb61-4f95-b9e4-e219c604fbf6/twitter

If you're struggling with diversity this is a great read. Also some great pointers on how to approach training.
https://hbr.org/2016/07/why-diversity-programs-fail